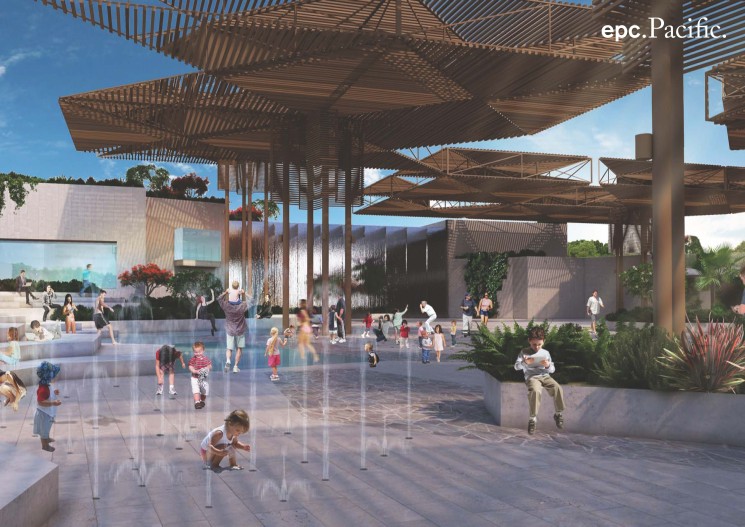 Phase two final plans unveiled for a new City Heart. Following months of public feedback the final design for the next phase in the 10 to 15 year redevelopment of Ipswich City Square was released today by epc.Pacific and Ipswich City Properties Pty Ltd (ICP) a wholly owned subsidiary of Ipswich City Council.

Over the last nine months more than 300 ideas were collected during the community consultation sessions. Mayor Paul Pisasale thanked the community for their feedback and said the first sign of work would be in the third quarter of 2017. “We asked. We listened. Now we are doing what people said they wanted.

“This $150 million transformation will give our CBD a tremendously exciting high quality active urban feel with a civic and community heart. The final plans reveal a vast new open space which can double as an outdoor venue to host major events for up to 4,000 people. It will be anchored by a large redesigned water play area that will also provide areas for entertainment in a family friendly environment. Under this new scheme Ipswich City Council will ultimately retain ownership and control of all of the new public space and civic amenity including the library, which will be a new standalone building opposite the administration tower. The new multi- level council administration building originally flagged for the western side of the mall will be better suited on the eastern side and will be developed and owned by epc.Pacific.” Cr Pisasale said.

“Importantly we have expanded the scope to now include demolition of the old shopping centre above the Queensland Motorsport Museum between Nicholas and Bell Streets. This will make way for a huge new outdoor space to host events, markets, artists and unique food experiences. It allows for the creation of Ipswich’s version of a Post Office Square. Ultimately, this will be the site of a future commercial development, however in the interim we have come up with an innovative way to utilise the space for the community. It will take advantage of Queensland’s outdoor lifestyle and will significantly boost green space in the heart of the city. Today we have delivered a considerably different and improved plan to secure the long term future of Ipswich CBD,” Cr Tully said.

Managing Director of the city’s development partner epc.Pacific, Patrick Smith, confirmed development plans for the project responded directly to the responses received and collated during the recent community engagement sessions and activities.

‘With ICP and Ipswich City Council, we collectively put in place a process and plan that enabled and sought strong community engagement and feedback to shape the evolution of the master plan, whilst also testing community demand for differing precinct based activities. The response was overwhelmingly in favour of a civic precinct development with flexible community spaces, a new generation library and family based activity areas together with a genuine food and entertainment precinct. The city’s soul is not and should not be a supermarket, it needs to be a place that is accessible, inviting, fun, dynamic and safe and provides a central place of gathering and activity for the entire community.

The new Ipswich City heart will aim to be the community’s stage, a place for the people of Ipswich, shaped by the people of Ipswich. The ongoing partnership between epc.Pacific, ICP and Ipswich City Council is unlocking a unique path to utilise private sector funding to drive the delivery of a key social infrastructure outcome. This project has allowed our team’s passion for place making and matching social return with commercial return to be fully engaged and utilised. We will back our vision with our capital and genuinely look forward to the community of Ipswich embracing and engaging with a modern civic centre and city revitalisation.”